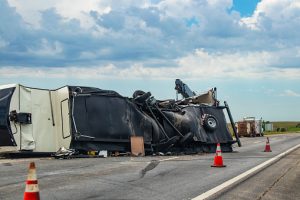 According to CNBC, fatal truck crashes have been on the rise across America since 2009. There are, of course, many reasons for this disturbing trend. The cause of a large truck accident can almost always be traced to some failure on the part of the truck driver, or the transportation company which employed the truck driver.

One of the most common and frustrating problems for transportation companies is the high rate of turnover among truck drivers. Long hours, low pay and tough working conditions have caused turnover among truck drivers to remain near one hundred percent. This means that truck drivers on the roadway are almost always inexperienced, and this increases the risk of having an accident. Also contributing to the high turnover rate is that fact that truck driving is a very dangerous job. According to the Bureau of Labor Statistics, more than 25% of all workplace fatalities in America in 2015 occurred in the trucking industry.

While the transportation industry will likely always have to contend with high turnover rates for truck drivers, there are safety risks which these companies can appropriately mitigate. It is crucial that trucking companies screen for problem drivers (especially those with a history of trucking and traffic violations) before they put these drivers on the road. Driver pay structure can also contribute to accident rates: because truck drivers are often paid by the mile, not by the hour, and are forced to choose between productivity and safety. New regulations are addressing this problem by requiring the installation of electronic logging devices. The American Trucking Associations estimate that these regulations, which allow federal regulators to view tamper-proof electronic data instead of relying on paper logs, will affect more than three million truck drivers in the United States. Even before these regulations take effect, transportation companies may be found negligent if they allow tired drivers to work too many hours.

Why Hasn't This Problem Been Addressed?

Every year, thousands of people die on American highways as the result of truck-related accidents. The Federal Motor Carrier Safety Administration has released its latest "Large Truck and Bus Crash Facts." This showed that 4,337 people died in fatal accidents involving a large truck or bus in 2015. In many other industries, that many deaths would attract national attention.

Unlike large or unusual accidents, fatal truck accidents are often scattered in small numbers, and occur all across the country. Unfortunately, these accidents don't often receive significant media coverage. Accidents like those involving actor Tracy Morgan are the exception. According to CNN, the National Transit Safety Board discovered that the driver of the truck which rear-ended Morgan's limo bus had not slept at all in the twenty-eight hours prior to the accident.

Trucking accident cases in Ohio are far more complex than typical crash lawsuits because they involve liability against the carrier, the driver, the owner of the cargo and possibly others.

Gervelis Law protects personal injury victims across Ohio and western Pennsylvania. The experienced truck accident attorneys of Gervelis Law ensure that accident victims are fully and fairly compensated for their injuries, and that transportation companies are held responsible for their negligence.