The best ideas for preventing injuries in car fires 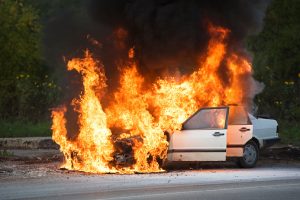 If you drive a Hyundai, Kia, or Tesla electric car, you may want to consider the risk of your vehicle catching fire. According to Consumer Reports, this happens more often than we think and is becoming a growing problem, with the advent of electric cars.

Earlier this year, Hyundai and Kia recalled about 168,000 of its cars in order to address a fire hazard with the fuel pipe, CBS News reports. This problem was initially caused by improper repairs during previous recalls.

In addition, the National Highway Traffic Safety Administration (NHTSA) launched an investigation into the fire hazards associated with Hyundai and Kia. In compliance with the federal agency, the automakers confirmed more than 3,000 incidents.

Tesla's electric cars have also raised safety concerns after several images and videos of fires circulated on the internet. In response, a company spokeswoman provided Consumer Reports with the automaker's Vehicle Safety Report, which documents a conflicting rate of car fires between 2012-2018. The report concludes that during that period, Tesla's electric car fire rate was one for every 170 million miles driven.

These figures are different from data released by the National Fire Protection Association (NFPA) and the U.S. Department of Transportation (USDOT), which shows a rate of one fire for every 19 million miles driven.

The problem isn't just confined to Hyundai, Kia, and Tesla's electric cars. Any vehicle can be engulfed in flames. The Federal Emergency Management Agency (FEMA) reports that from 2014-2016, there were roughly 171,500 highway vehicle fires across the United States - more than 80 percent of which involved passenger cars. During that time, approximately 345 people were killed and 1,300 injured in car fires.

What's more shocking, only five percent of car fires from 2014-2016 were caused by crashes, according to the National Fire Incident Reporting System (NFIRS). Crashes were the cause of 60 percent of fatal highway vehicle fires, however.

What are the warning signs?

Consumer Reports discusses some effective ways to prevent serious injuries and fatalities in the event of a fire.

First, it's important to know when a fire is imminent. The NFPA says these are the signs to watch out for:

If you notice an unusual smell, smoke, or flames, you should first quickly pull over and shut off the engine. This stops the flow of fuel and prevents the fire from growing. If you suspect a fire in the trunk or hood, do not open it, as increased oxygen may only enlarge the fire.

You should then get yourself and your passengers out of the car and at least 100-150 feet away. You should keep a safe distance from the car, out of the way of traffic, and call 911 immediately.

If you have a fire extinguisher, don't attempt to put out the fire unless it is done from a safe distance and the extinguisher is approved for Class B or C fires. Check the label to make sure.

Can fatal car fires be prevented?

Some fires happen without warning signs. That's why it's important to consider following these guidelines to help mitigate the risk:

In the event you or a loved one is injured in a car fire, speak to an experienced Ohio car accident attorney as soon as possible. If your car manufacturer or distributor sold you a defective product that put your life in danger, the attorneys at Gervelis Law Firm will help you seek the justice you deserve. To learn how we can help, contact us online.