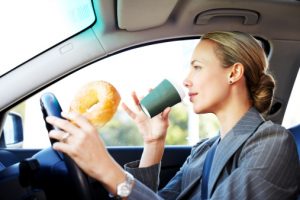 It's all around us and it comes in many forms: distracted driving. It doesn't have to involve prolonged use of a handheld device behind the wheel. Distract driving can involve taking one's eyes off the road for a just few seconds to send a quick text or check social media notifications. Or it can be casual, such as making a phone call or eating while driving. Whatever the activity, distracted driving can also result in serious car accidents.

The primary factor in distracted driving is the perceived ability to multitask. Most people who engage in multitasking behind the wheel don't believe that their actions will cause a crash. Maybe they've been doing it for a long time without any issues. However, it only takes one split second for a serious crash to occur.

The National Highway Traffic Safety Administration reports that roughly 481,000 motorists use handheld devices while driving. This type of behavior resulted in 3,450 road deaths in 2016, and 391,000 injuries in 2016.

According to researchers at the University of Utah, the ability to successfully multitask while driving is far-fetched. The study collected survey answers and tests from 310 undergraduate psychology students. The areas examined included:

For those who were more likely to engage in multitasking, the core cause was the inability to avoid distraction and focus on a single task.

Injured in a distracted driving accident? Our attorneys can help!

Being injured in an auto accident with a distracted driving can be frustrating and emotionally draining. You may know 100 percent that the other driver's negligent behavior caused your crash. However, proving it may be difficult. That's why you need a highly skilled Ohio auto accident attorney in your corner, fighting for you every step of the way.

The experienced legal team at Gervelis Law Firm can thoroughly investigate your crash. Perhaps the at-fault driver left clues on social media or through text messages. Perhaps there were witnesses at the scene of the crash who saw what happened.

We'll use any evidence we find to piece together a strong claim while you focus on what really matters - your recovery. Contact us today to find out how we can help.