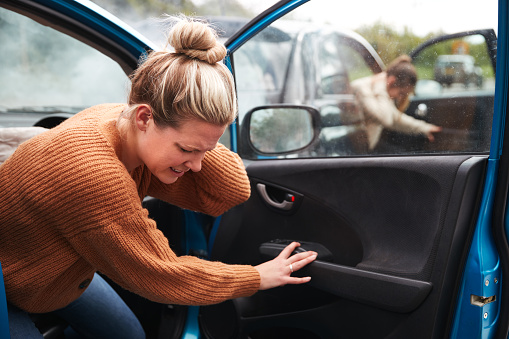 In similar car accidents, women are more likely to suffer severe injuries or death when compared to men, according to a new study.

Conducted by the Institute for Highway Safety (IIHS), researchers found unequal car and truck safety standards for men, women, and anyone who falls outside of the "standard" male body type.

It turns out safety features and crash-test ratings are mostly based on the protection of 5-foot-9, 170-pound males.

This is the size of the crash-test dummies car manufacturers use to design their vehicles. It's also the size of the dummies used by the federal government's 5-Star Safety Rating program, which raises the question: "How reliable are those safety ratings anyway?"

When you see a crash-test rating, it's important to realize that the safety measure applies to an average-sized man. That means something that's been made extra safe for a man may not save a woman.

Note, too, that overall more men die in car accidents every year than women. This is because there are more men on the road and they are driving longer distances than women.

The concerning part is that if a man and a woman are in the same exact accident, the woman has more of a chance of being injured or killed than the man.

The IIHS study has prompted talk of improvement and more consideration of safety features for people who aren't average-sized, adult men. The key to better tests may mean using a new type of crash test dummy known as a THOR.

Could the THOR crash test dummy be the new safety standard?

More and more, people are realizing that the one-size-fits-all approach to safety is seriously hurting individuals and their families.

In the early 2000s, developers in the National Highway Traffic Safety Administration and Humanetics tried to improve on the standard crash test dummy.

The normal dummy, also called a Hybrid III, has about 10 sensors that provide simulated biofeedback to researchers. THOR has 200 sensors and is a more useful dummy for safety design and crash testing, advocates say.

Unlike the standard model, the new dummy provides crash data on parts of the body that are more likely to be injured on women and shorter or larger men.

It also has more sensitive instruments in the neck and head area — a region where women suffer more severe injuries than men due to lower muscle mass. (Women are also more susceptible to injuries involving the legs, spine, and abdomen, particularly in front-end car accidents.)

THOR, however, has been put on the backburner. Although they helped design it, the NHTSA has not adopted THOR as the new standard for crash-test ratings.

More than 20 years after THOR hit the market, the NHTSA says it is still studying whether to use it in testing.

If the government is not going to base its 5-Star Safety Rating around THOR, manufacturers are not going to design their vehicles for it. Thus, unequal safety standards for men, women, and people of various body types persist.

Meanwhile, it is important to note that the federal government does do some testing on crash safety for women.

Crash victims have rights. Gervelis Law Firm can fight for them.

Today's cars come equipped with the latest safety technology, but clearly, those features don't guarantee you'll avoid a severe injury in the event of a bad crash — especially if you're not a 5-foot-9, 170-pound man.

Under Ohio law, you have the legal right to hold a driver financially responsible for all your injury-related expenses if you were hurt in an accident as a result of that driver's negligence. That means you can seek compensation for your current and future medical bills, lost wages, your pain and suffering, and any other damages that arise from your injury.

Evidence is important to any case, which is why our Rapid Investigation Team can be at the site of your crash within 24 hours to collect and protect evidence that's important to your case.

Don't waste your time struggling with an insurance company to recover the compensation you're entitled to. Let an experienced car accident lawyer who knows how to win for injury victims in Ohio fight for every dollar you deserve.

Contact the Gervelis Law Firm today. Our main office is located in Canfield and we have other offices in Columbus, Warren, Akron, and Toledo.