Office Locations
Free Case Consultation
Home » Blog » Could a Truck Driver Be Liable for a Truck Accident Caused by Snow or Ice?

Could a Truck Driver Be Liable for a Truck Accident Caused by Snow or Ice?

If a truck accident occurs, it becomes important to determine who was responsible for causing the collision. When a truck driver did something to cause the accident to happen, the driver could be held liable for losses. Because drivers act on behalf of their employers, the trucking company could also be responsible for compensating crash victims. 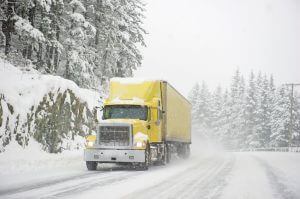 One common question victims have is: what happens if a truck accident is caused by bad weather? Snow and ice just happen in Akron, and bad weather is not anyone's fault. If the truck crash occurs due to a storm or poor road conditions, is the truck driver still to blame?

In many cases, the answer to this question is yes. If a truck driver causes an accident during bad weather, the trucker and trucking company could still be made to pay victims damages, as long as the victims can prove the truck driver was negligent. An attorney can provide assistance in demonstrating negligence.

Although snow and ice can make roads more dangerous, these bad weather conditions are not the ultimate cause of truck crashes that happen during the winter. Instead, it is the driver's actions within the snow and ice that caused the truck collision to happen.

In other words, a professional truck driver has a legal duty to adjust his or her driving skills to account for the snowy and icy conditions. If the truck driver does not change the way he or she drives to ensure safety, he or she can be held liable for any crash that happens as a result. If a trucker does not drive with a reasonable level of confidence and make safe choices when it comes to driving in a snow storm, he or she could be held responsible.

The behavior of a trucker is compared with what a hypothetical average reasonable driver would have done under the same circumstances. Reasonably competent truckers will slow down when there is ice or when visibility is impacted. Reasonably prudent truckers will leave a longer following distance in adverse conditions and will follow many other tips for safe winter driving, such as those listed by SmartTrucking.

If a trucker keeps driving when conditions are bad and fails to take reasonable precautions like slowing down on icy roads, a crash victim could be able to prove the trucker failed to live up to his or her duty to drive in a safe way. An attorney can help victims of a winter truck accident to demonstrate how the crash happened and to show that the truck driver took unsafe risks given the weather. If a victim can successfully prove this, the victim should be compensated for all economic and non-financial damages occurring as a direct result of the bad-weather truck accident.